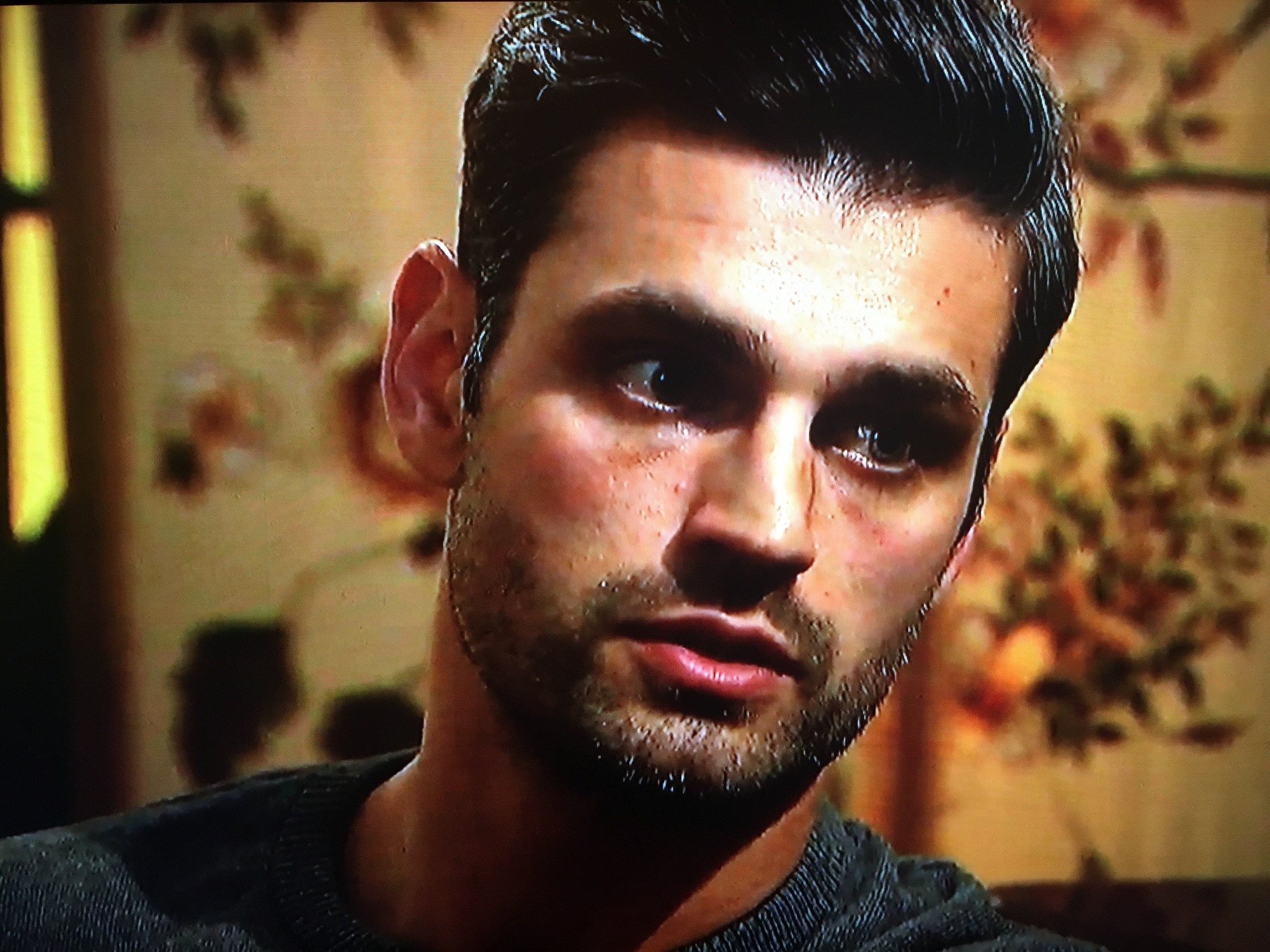 After a week delay for the Men Tell All, the finale has arrived. Chris Harrison is live in the studio and makes an announcement that for the first time ever they will have The Bachelorette live in studio to comment on the entire episode. Nice personal touch.

Things continue where they left off, with Peter and Rachel on a verge of a breakup. Begging for a proposal and ring. She gives him an “anyways” response. Bitter Rachel. She makes up an excuse in her mind to keep him around and offer the overnight date card. We all know that’s what it was all about. Whenever Peter talks, it sounds like he’s fearing something. Morning starts and Peter lost his shirt in the winery, because he peeks out the window shirtless and begins making breakfast eggs.

Remember Bryan, well, he finally gets his date with Rachel who attacks him like a vulture upon sight. Rachel begins to blame Peter with messing with her mind, in turn making it more difficult to completely focus on Bryan. Back to Harrison and Rachel live and Harrison can’t get over how amazing it is to be in front of a Bachelorette as she rewatches her season. Bryan feels that something is off. Yeah dude, she’s finally thinking of her other options. He still gets a date card. Bryan thanks Chris. Yup, it’s Harrison who is inviting you on this overnight. Rachel brags about how important the overnight dates were. I bet.

Back to shirtless Bryan waking up in the morning. Can these guys sleep in a shirt for once? Cheery Bryan believes the chemistry is back. He may be right judging on how Rachel’s hair is messy. Rachel’s meaningless analyzations of the men follow. The poor soul known as Eric is about about to encounter his doom and gloom.

Hopefully they clear that basketball court, because Eric is coming there soon. Bryan gets the obvious first rose. Peter and his gray hair are staying as he gets the remaining rose. Fake Bryan does his worst acting job of the season by giving a surprised reaction when Eric is sent home. Eric follows up with some meaningless words of wisdom. He tells her that he will always love her. This coming from a guy whose never been at love. Harrison continues to lie about some phantom love between Eric and Rachel.

Eric comes out and further praises Rachel. He tells her that she helped him become a man in making him fall in love with her. Rachel is feeding him a bunch of sweet nothings about how great he is and will make another woman happy, etc. Get Eric off this set already, she’s doesn’t look comfortable with him next to her and having to give him reasons why he didn’t make the cut.

The great debate begins for the two most obvious guys to make it to the end. Rachel says that she wants to find out how real things are between her and Bryan, well buy him another watch or gift and you’ll find out. Can the show allow the viewers to have a suggestion box online, so that the entire nation can suggest they go away from any helicopter or balloon rides for at least one season. Heck, have them walk or rollerblade. That being said, Rachel and Bryan take a hot air balloon ride. Bryan can’t envision not being picked by her. He reinforces his love for her, again. Bryan and Rachel’s Spanish dictionary is presented. Bryan even took the liberty of highlighting some key words and providing the English definition for them for words such as “wife.”

Casual Peter steps out of the creeper van to meet with Rachel. Peter acts stunned as if he’s never been in Rioja, Spain. Another monastery exploration. She likes going to church with these guys. Hopefully she prays for the right man to stick around. Rachel is wondering what Pete is thinking, well, he’s clearly thinking about not proposing to you. He leaves her in further doubt by being unsure about having to make the decision to propose in 24 hours. Peter gets a late night visit from Rachel in his room, its where he breaks to her that he’s not ready to propose. She cries out of her desire to guarantee a proposal. He’s keeping it 100 with her when he tells her he can’t and won’t propose to her. Self-elimination.

Peter begins to backtrack when the split becomes inevitable. He says he’s willing to go against his beliefs and give her the proposal. She tells him she wants someone to be sure of her and want to propose to her. He asks her if she wants a mediocre life with someone or have an amazing one with him. Damn. They appear done. He walks her out and they make out in the hallway. Peter and Rachel are balling tears as she walks away and into the rain.

Back to the live studio with Rachel and Harrison. She talks about still not knowing how to feel about about the breakup and Harrison eggs her on about it being so emotional and incomplete. He asks her if she wants to see Peter who is live backstage, she says no, but she has no choice in this. After the break, Peter will be facing Rachel. Ah, the drama. Out comes Peter. He says that he’s “shaking like a leaf.” Peter admits to to letting her go and not understanding why he did that. He says he still struggles with that. Rachel begins her dig by referencing her feelings in Geneva, she says he reminds her of her previous relationship.

Harrison pretends to be a some sort of a head shrink by asking Peter if something is wrong with him. She tells him that he wasn’t ready and the show isn’t for him. Good for Peter avoiding that mediocre attorney. Peter doesn’t regret what he said that night, he’s glad he remained true to himself. Peter reminds Harrison that there was a straightforward breakup.

So now that the drama is complete, the remainder of the underwhelming proposal formalities are left. So Bryan arrives, with zero competition left. He spills out his love to her, but it makes you wonder if it’s the gusting wind that’s blowing nonsense into him? Rachel, without any other options, tells him that she sees a forever with him. He gets down on his knee and proposes to her. There it is, her desired engagement.

Now it’s time to bring out Bryan to the live studio audience. Bryan comes out and redo the engagement and put the ring on her again. This woman (Rachel) beams about her excitement about being with Bryan, yet she had to cut into Peter and make sure he has no chance of being The Bachelor. The fairy godfather Harrison announces that they are heading back to Rioja. 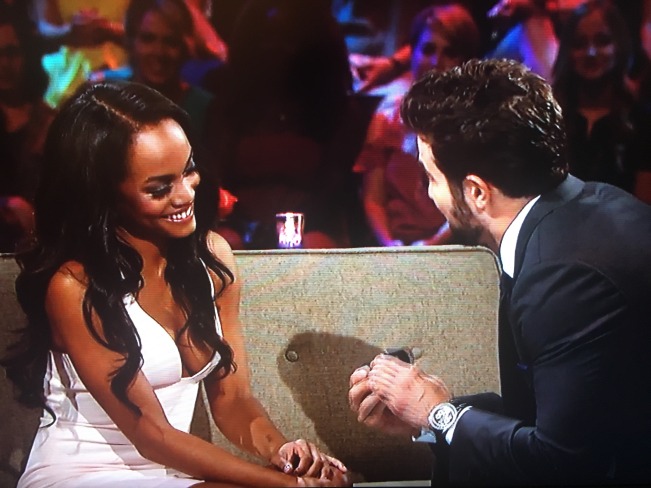 Wow that was a long drawn out episode that could have been shown in half the time. That’s why it should have been aired last week in conjunction with the Men Tell All. So the first hour and half was pretty underwhelming. Bryan got his overnight date. Eric got sent home as expected. Then more solo dates with the two remaining men. Finally things got interesting when the hotel room conversation between Rachel and Peter led to their breakup. Then things fall off for the remainder of the episode.

I must say that I expected Peter to be that guy, and he probably would have been if he didn’t want to leave so bad. He eliminated himself. Bryan was gaining momentum since the wine cellar debate between Rachel and Peter. There was no denying that Rachel was mesmerized by Bryan from the start. I felt that Bryan wanted to be in the running for The Bachelor gig, but that may go to Peter now. I thought it was bush league for Rachel to repeatedly try to dig into Peter by telling him he’s not ready for the process that is the show. My thinking is if she was so happy with Bryan then she would be polite and happy for Peter sticking to his guts, and not attempting to dig into him and question his purpose on the show. Kudos to Peter for sticking to his beliefs and not falling into the pressures of proposing to her.

I’m glad this season has come to an end. It wasn’t exciting, predictable till the last half hour of the finale when the Peter breakup happened. It was always going to be between Bryan and Peter, which was evident from day one. Rachel was one of the most unlikeable Bachelorette’s in my mind. She said to be sassy (by Chris Harrison), but in reality it was poor attitude and she was vindictive with her exes on the show. Onto Paradise. A clip was shown previewing the upcoming season of it, which once again looks promising. It all starts agin next week.