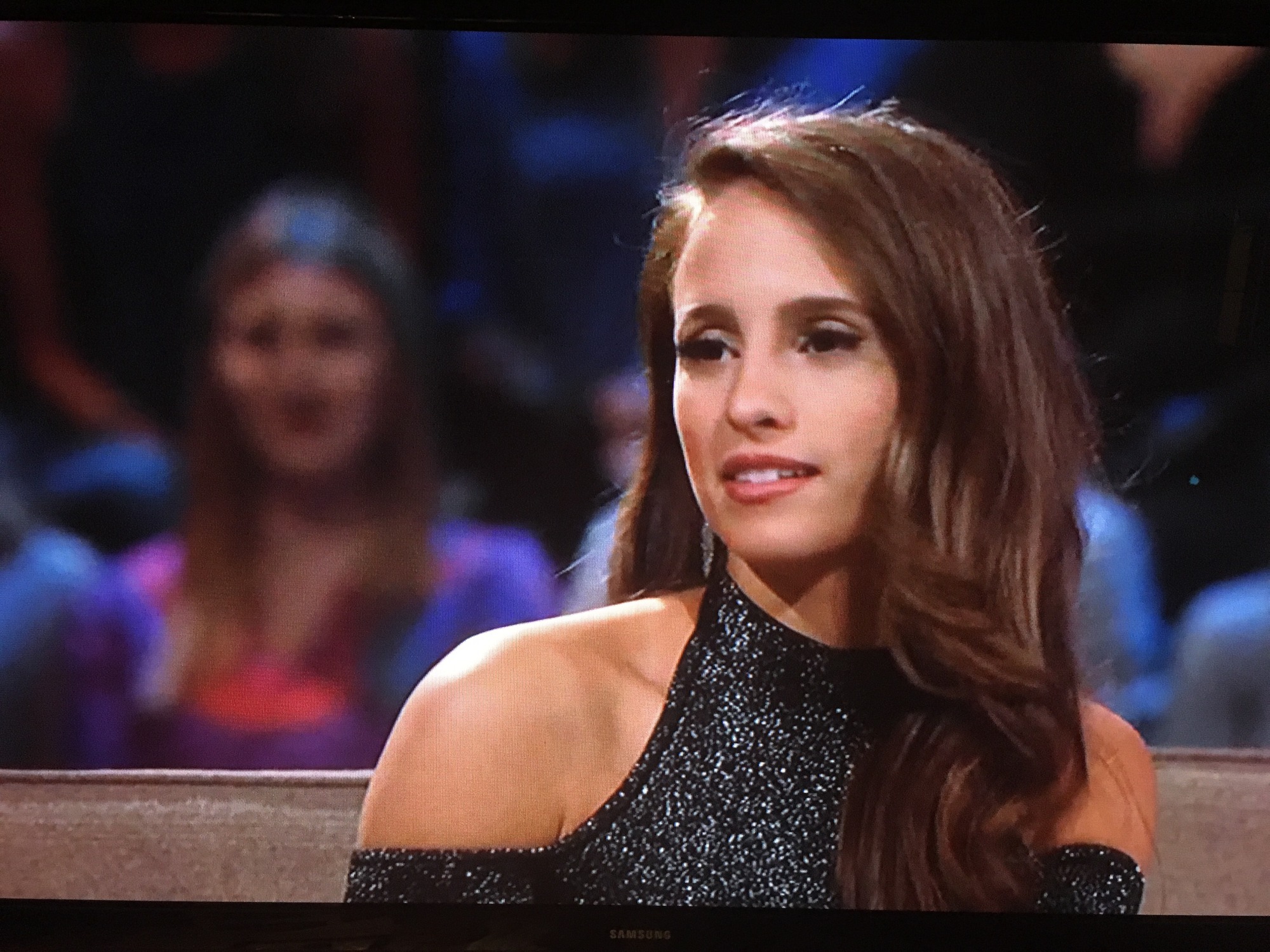 This is it, Nick Viall’s journey as The Bachelor finally comes to an end (I won’t be fooled). It gets started with Chris Harrison previewing the episode live from LA, studio audience and all. The episode starts out with Nick visiting with his parents and 100 plus siblings. Raven is the first one to arrive in Wisconsin in the middle of winter. At least Raven seems to be aware that she’d be marrying the family. That’s marrying into a family with more members in it than the entire town of Hoxie. Nick’s toothy teenage sister is the first one to interrogate Raven. Nick’s mom has reservations about Nick being sure that Raven is a woman that won’t hurt him. If only Nick was as invested in these women as mom seems to be.

The family is anticipating Vanessa’s arrival. Nick’s brother offers a great point when he mentions Nick’s poor track record with women. Vanessa introduces herself to the family and delves into her puke story. Vanessa talks about her concern about moving out of Montreal. I liked how Nick’s father talks about the past experiences by starting out with “on Andi’s season,” yup, even dad refers to his love life as “seasons”. Dad breaks down while talking to Vanessa, he literally and figuratively. The family shows more concern about him ending up with someone. Back to Chris Harrison live, he asks the audience who they think Nick will pick? Unanimously everyone raises their hand for Vanessa. It’s that clear. Close second were the loud groans to him ending up alone. Can’t fool the public, they know he’s coming back to television.

Back to Finland. So, apparently after visiting the family in Wisconsin, they are back in Finland? What? Vanessa and Nick get a final date together and go horseback riding in the snow. Nick takes her to some woodshed, not for any rondevu, but to meet the Nordic Santa. Vanessa is more thrilled seeing Santa than she ever was to see Nick. They ask Santa for some love. Worst thing to ask, considering Nick isn’t getting any. Once again Vanessa is struggling with not being the only option. More whining, what’s new. After the break, they talk again, a.k.a her asking about reassurance that she isn’t getting.

Nick’s date with Raven is up next. Where could he possibly take her? That’s right, ice skating. Luckily for Raven that she skates, or else she’d never get to go on a date with him. Out of nowhere Nick is seeing carrying adorable Husky puppies. Raven hopes that her kids with Nick will be as adorable as the pups. Girl, who are you kidding, we know they wouldn’t come close to being cute like the pups. While Raven is more sure by the moment that Nick is the guy for her, on the contrary that doesn’t seem to be the case with him based on his stoic emotion with her. Nick tells her the he’s never worried about her. Is that a good or bad thing? She tells him that she loves putting up with him. Said no girl in history, ever.

The Bear’s Den is where Nick is hanging out, but he’s not alone. Neil Lane arrives in Finland to give Nick the rings, or maybe to inform him that he’s been eliminated. He picks the biggest ring ever given on the show. Onto the lucky or unlucky ladies. Raven arrives. Looking stunning. They are doing the ceremony in the fricken’ Bears Den. Raven reveals her love to Nick, only to see him start crying and backtracking. The swan song for Raven is underway. He tells her he’s not in love with her.

It’s all onto Vanessa, will she accept his proposal? Vanessa arrives, Nick doesn’t wait to tell her that he was in love with her from the first moment he saw her. Vanessa reveals that she was hoping that nick would love every part of her, I bet he did. She tells him that she can be emotional and a little crazy. Please elaborate on the “little crazy” part. He gets on down on his knee and proposes to her. She accepts. He gives her a final rose, she accepts. Nick finds love…for now. Nick announces that he’s ready to start a life with her. How does starting that life in Montreal sounds to you Nick? The End.

AFTER THE FINAL ROSE:

Nick is greeted and comes out first. Tells Chris Harrison that he relates and empathized with how Raven felt. So Raven comes out and looks hotter than ever, damn, buyers remorse? Raven tells Harrison that she expected to get picked. She doesn’t seem beat up about it. She tells him that she wants “the world” for Nick and is happy for him not being rejected. Raven is looking for love and Harrison pitches Bachelor in Paradise to her, so she accepts the invite. Very civil and straightforward. No drama between Nick and Raven.

Vanessa comes out and confirms that there is an world outside of the bachelor universe (see what I did there). She reveals she almost forgot to exchange numbers with Nick. She has been doing the long distance relationship with him, she’s in Montreal and he’s somewhere in Hollywood. She keeps saying they are a “team”. She also states that they have had some ups and downs since the show wrapped.

The happy couple is reunited and seen in public for the first time together. Nick reveals that there are things for them to work out between them. Vanessa feels they don’t have to prove anything to anyone. She tells Harrison that she’s okay with moving to the States. They are taking “baby steps” in marriage. They look disjointed. Politically correct. The next topic is Dancing With The Stars, a.k.a focusing on Nick’s next career move. Next up, Harrison teases an epic announcement that will affect Rachel’s season.

Rachel comes out looking very much like a lawyer in her all black top and dress pants. She’s happy for Nick finding love and has moved on herself. She’s nervous that it might not work out for her. She plans to take tips from Nick, err, why? The support she’s gotten from the people has been shocking to her. The shocker that Harrison announced is that her journey as The Bachelorette starts out right now! Crew workers begin to assemble a fake set that resembles the parking lot of the mansion. So the guys from here upcoming season begin to come out and meet her, one-by-one. A total of four of them are introduced. Basically they go 0-4 as far as first impressions are concerned. To be fair, it was super awkward to come out in front of a set full of people. That was your teaser for the upcoming season, so hold on, might be as exciting as this “epic” surprise.

So this is it. Nick’s season finally concludes. Looking back it was fairly mediocre. There were some surprises along the way, but it seemed to loose momentum the last couple episodes. Things became mundane with the hometowns episode. Rachel’s Bachelorette announcement really set things back. Lots of the mystery was faded away, especially considering she made the final three. Everyone, including her nanny, knew Corinne wouldn’t be winning, so her making it to hometown was anti-climactic. Raven was such a dark-horse from the start, I’m surprised she made it to the final, but it was pretty apparent her cinderella story was going to evaporate. Vanessa seemed to be the choice for a while, sort of like Shawn was for Kaitlyn. Aside from Corinne, there was little drama with other women. Everyone not named Corinne seemed to get along.

The episode was standard also. I was surprised to see the final rose ceremony was in Finland, so they left and went back to Finland? Can’t be so. After The Final Rose was so dull that they had to have Chris Harrison tease an “epic” announcement. Raven and Nick were very civil with each other, surprisingly not awkward at all. Guess she knew he wasn’t going to pick her, or didn’t want to be. She did accept the offer to go to Paradise. We will be seeing her this summer. Vanessa seemed open about her relationship with Nick, but also defensive. She did most of the talking. They doesn’t seem lovey dowey with each other. This probably won’t last long, as the the distance seems to be a big issue, even though she said she’d move to the US. I’m not buying it.

The after show was basically a big promo for Rachel. They gave Nick, Vanessa and Raven about half hour, then it was all Rachel. The epic tease was that they were going to start her season right there. A fake set was replicated and the underwhelming men came out to greet her. This wouldn’t be happening if they got more out of Nick and Vanessa and if they didn’t have to sell Rachel to the audience. It was lame. The guys were boring and awkward. This wasn’t a great idea.

Overall, the season was okay. Not as much drama from Nick as expected due to all his experience on the show. Won’t go down as the most memorable, but probably not forgettable either, due to Corinne, who became made the biggest name for herself. As the book closes on Nick, something tells me this guy will be back again, not like it hasn’t happened before.