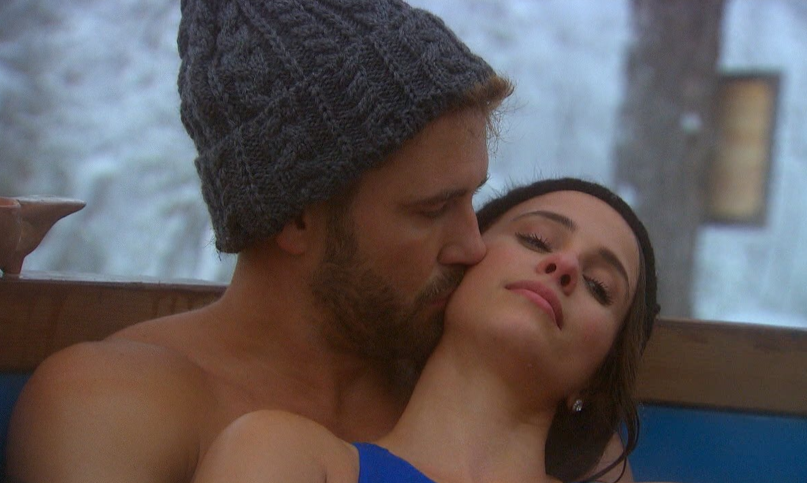 Last week we left Lepland, Finland with Nick and Raven getting ready to spend the night together, and her hoping for an orgasm. The continuation of the episode starts with Nick and Raven making out in the UFO space ship looking cottage. He kisses her and next we see Raven running around like a loose chicken high-fiving strangers, petting dogs, kissing statues, doing snow angels in what appears to be the most unoriginal forced montages this show has ever produced, and these are the same guys that run Bachelor in Paradise, enough said.

Rachel is up next, or shall I say up for the last time. Rachel isn’t feeling Finland much, considering she doesn’t even have an idea what cross-country skiing is? We knew this chick was from Texas, but damn, this is an embarrassing moment. Watching her ski is like watching a house of cards continually crash, it’s a disaster. Another revelation, she’s never seen a reindeer? Has this woman been locked up in a closet or something? I’m already worried about her season of The Bachelorette, because she’s so monotone and flat, boring actually. She tells Nick that rejection is her biggest fear. Yet another obvious revelation. I’m so bored with this. Let me switch over to WWE Monday Night RAW for a minute. Ok, I’m back and Rachel is still boring the hell out of me. Nick is “rare and refreshing” in her eyes. Yeah, and you are stale and predictable.

A new Rachel revelation when she says she’s falling for Nick, but is scared because “I’m a person who makes decisions when I know what the outcome is going to be.” As every minute goes by with her on-screen, I’m more and more perplexed how this woman got chosen to be The Bachelorette? She has such a dry and matter-of-fact personality that is hard for dating, much less reality television. Rachel tells him how she doesn’t know how to verbalize and is so scared of opening up, which sounds a lot like majority of women I go on dates with. This is a pandemic in today’s society of everyone being so afraid to be hurt and open up to show their real selves, however these people aren’t going on The Bachelorette.

Nick does call her out on her crap, they make out and she gets the overnight date card. Nick couldn’t wait to go upstairs with Rachel and start rolling around on the bed. It ends on a great line when she says, “this is exactly the man I’m supposed to be with,” but you won’t. They definitely do hookup though as they wake up half naked in bed together next morning. Maybe Rachel wasn’t whining about orgasms like Raven, so Nick and her just got straight down to business.

Date number three is with Vanessa. Nick drags her straight to a ice bath. This can’t be a good idea, unless seeing Vanessa in a bikini warms your heart, sure does it for me as soon as I see her rockin’ the blue one-piece. So old-school, yet sexy. Once again Nick proves to America that he is a major wimp, as he can’t last more than a second in the ice tub and Vanessa is more willing. So these buffoons keep going in and out of this tube and running back and forth inside to warm up. Vanessa comes up with this novel ideal about counting Mississippi while in the ice water. Girl, even in Mississippi they don’t do such ridiculous things.

Clever guy Nick justifies all this nonsense as an important experience that shows him that can get through difficulties together. Well “other guy” (the fitting name Shawn Schnozling gave him) going into a freezing tub of water is nothing like dealing with marital and relationship issues that involve money, jobs, family,etc. If that wasn’t clear why this guy can only make it as professional reality celebrity then you’re missing the point of who he is.

The convo finally gets real when they bring up their families. Vanessa tells him she won’t compromise on her 3 hour Sunday family time. Seems like this would be a problem when you’re dating a guy who won’t ever leave LA. She really should have thought this over before coming on the show. At least she is starting to get it when she mentions that there are issues with them making compromise and how she’s starting to see how this could not work. Earth to Vanessa! Took you a while.

Next up they go into a giant decked out tipi where they continue the conversation about moving. Nick tells her that he doesn’t feel good about moving to Canada. Watching these two bicker over moving and compromising is reason enough why they would last less than a week together. This would be one annoying couple. He hands her the card and she accepts. Door the the bedroom closes and off they go for an all-night romper. Nick and Vanessa wake up together, after presumably having sex.

The last ceremony before the final has arrived. Vanessa continues to freak and worry about Nick being in love with other women. The first rose goes to Raven, who gets an automatic bid to the final. The final rose of the night goes to Vanessa. Quite the shocker there. Who could have imagined the announced Bachelorette Rachel is going home. Rachel and Nick have a genuine convo. He tells her it’s not a forever goodbye and how amazing she is, or as Danielle M. would have said, “not amazing enough”. Rachel bids goodbye for the next couple months as she goes on a hiatus before her season starts and in return we get a little bit of intrigue for the finale. In the spirit of March Madness, are you going with the Hoxie region or the Montreal one?

Not much mystery coming into this episode, we all knew this was the swan song for Rachel. Raven’s date was almost entirely shown the last episode, so this one was her corny montage. So goofy. Rachel proved how boring she can be. She’s real, but damn is that girl so matter-of-fact and boring. Their connection fizzled this episode, even though he basically tole her he’s falling for her. Not sure how her dull personality won him over? Nick must really be into Vanessa physically, because they have zero chemistry. Yet, she’s probably going to win. Ultimately Rachel is sent home, shocker. This feels like the most anti-climactic finale in years. Raven never felt like a front-runner, she just kinda slid though. This has to be Vanessa, even though their relationship is rock and personalities clash. I just don’t feel the hype or excitement for the finale, and don’t care who will will, because Nick doesn’t seem that into either of them. Kinda ready for this season to be over.