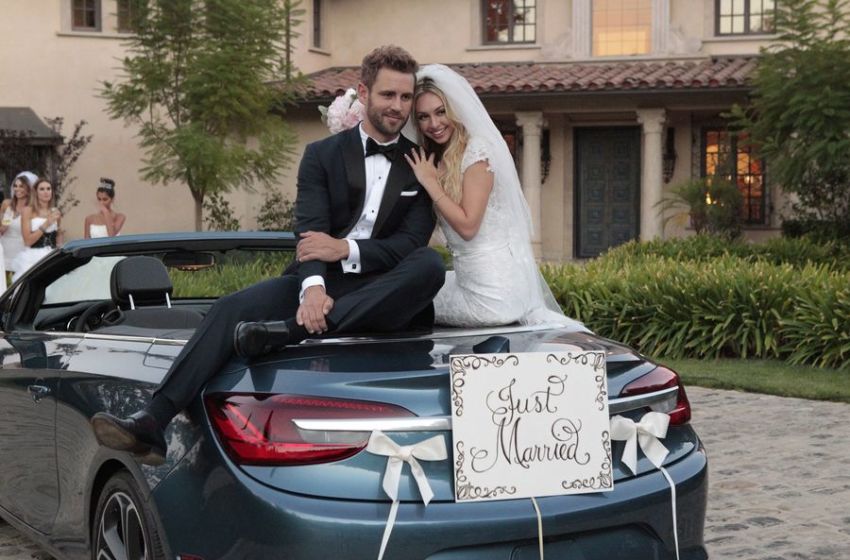 Corinne leads the way with a champagne toast. Who better? Rachel slept two hours cause she was too giddy from getting the rose. Girl, get some sleep. Chris Harrison arrives with a date card that somehow Josephine gets to read. It might be the last things she does this season. The group date will consist of: Corinne, Vanessa, Sarah, Alexis, Hailey, Lacey, Brittany, Jasmine, Raven, Danielle L., Taylor, Elizabeth W.

The women hop into a few navy convertibles and off they go to their group date. There is a Go Pro camera attached at the backseat, how fancy. The group date consists of a wedding photo shoot. So half the girls don’t get a dress. Out of budget maybe? The women are getting dolled up, while Corinne uses the time to brag about kissing Nick and being a bikini bride, until she finds out that Brittany is going topless! Now I’d take that over whatever Corinne has going on.

The wedding photo shoot consists of a bunch of goofy bridal themed outfits. The women start to kiss Nick forcibly, also awkward a bit. Taylor gets a princess theme and ends up gently making out with Nick, to all the women’s delights, besides, you know it—Corinne. Meanwhile back at the mansion Liz is sheepishly smirking as the women fantasize about kissing Nick. Back to the shoot, where Nick is wearing all some leaves covering his pale junk. That dude has not seen the sun above his knees in about a century. I fully believe now that Corinne is in business, considering it wasn’t her business to lift her top off and unveil all her boobage for everyone to witness in her pool picture shoot.

The winner of the photo shoot “challenge” judged by the photographer is—Corinne! Well isn’t that a pervy way of picking. The prize for that appears to be further photo shoots, which doesn’t seem like much of a prize. During the evening rooftop mingling session Corinne get some more solo time with Nick and makes sure to get her tongue down his throat also. Back at the mansion a date card arrives. The one-on-one goes to Danielle M. (Whitney Bischoff 2.0).

Corinne is interrupting everyone and cementing her villain status. Taylor gets interrupted by Corinne, so she leaves and complains to the girls and comes back to interrupt her. Taylor is showing some moxie. Finally a girl besides Corinne that asserts herself. Corinne, the spokesperson of the group, describes how things will get “uncomfortable” moving forward. As if she knows due to her experience of doing this before? Comical. Nick arrives to hand out the group date rose which goes to Corinne, who boasts about how her dad would be proud of her. Of course any parent would be comfortable with their “CEO” daughter flaunting her boobage all over national TV. The next day, Corinne is bragging to Lacey about getting the rose. One peculiar quote that came out of her from the convo was when she tells Lacey, “when i was talking to him he was listening, guys don’t listen to me,” that explains it all.

Danielle is finally on her date with Nick taking a chopper ride right onto a yacht. Now that’s fancy. Nick talks about the comfort level with her and describes her as a “down to earth Midwest girl”. Not the description I’d use on the Midwest girls I’m meeting. At the house every time Liz gets on camera she doesn’t fail to remind that she’s slept with Nick, as if it’s her gateway to stay on the show and get camera time. She finally decides to tell Christen that she slept with Nick at the wedding.

Neonatal nurse Danielle is on a dinner date with Nick and they delve into his past experiences on the show. Here we go again with Nick rehashing his past. Best part is Danielle sort of chucking all along as he’s talking. Danielle drops a bombshell that she was engaged previously and that her fiancee died due to an overdose. That must be difficult. Nick offers her a date rose and she plants a legitimate kiss on him. The date concludes on a ferris wheel ride. At home the women are anticipating another date card which arrives with the names of Christen, Josephine, Astrid, Jaimie, Kristina and Liz.

The ladies group date is in Hollywood at the Museum of Broken Relationships. Whatever that may be? This place is so odd, littered with remains of relationships gone to waste, including Nick’s engagement ring to Kaitlyn. This had to be planted, no way that rose and ring get into a museum. A fake fight is being reenacted in front of everyone, “The Art of a Breakup”. The symposium will consist of fake breakups with Nick. This is such a pointless and dumb date. Why would they be breaking up with a guy they want to get with? Who in their right minds would go to witness breakups in front of them? The audience CLAPS for this?

Astrid gets to first breakup with Nick and knees the rose in half. Kristina breakups up over flossing? Josephine brings the heat with a hard slap to his face. Now we are talking. Liz is up and as she walks up it’s already awkward. She reads some story about her encounter with him. The breakup with Liz is one of the most awkward moments of the season. Ohm nightclub is the place where they hangout after that weird date. Biggest reveal of the night is Kristina telling Nick that she’s from Russia. Things got a lot more interesting when Jaimie tells him that she’s dated a girl in the past. All is fine and dandy until Christen brings up the whole Liz thing. Wise man Nick comes up with the grand theory to figure out if Liz is there to explore a relationship with him or to get on TV. About damn time this convo happens between them.

The chat between Liz and Nick starts out about their encounter and why she didn’t reach out to him. She made some excuse about not being a phone talking kinda girl. He gets a moment of clarity and decides to send her home. The conquest was achieved months ago, so apparently he has no reason to keep her around. Nick goes back to the remaining women to come clean about his dirty secret with Liz. He straight up tells the women that he sent her home and that they met previously and had sex. TO BE CONTINUED…

So the first half of the show was all about Corinne and her loose sex appeal. She’s cemented herself as the main villain, winning a rose by flashing her boobs. Danielle set things back on track to normal for a short while. Leave it up to Liz to make things awkward and bring out the whole Nick encounter from the past. So this was a heavily Corinne and Liz dominated episode. Seemed like many of the dramatic clips of the season preview occurred tonight, among them the Corinne clothing stripping, the Josephine slap, the Danielle M. date, and the Liz reveals. It’s say at least a quarter of the big surprises were shown in this episode.