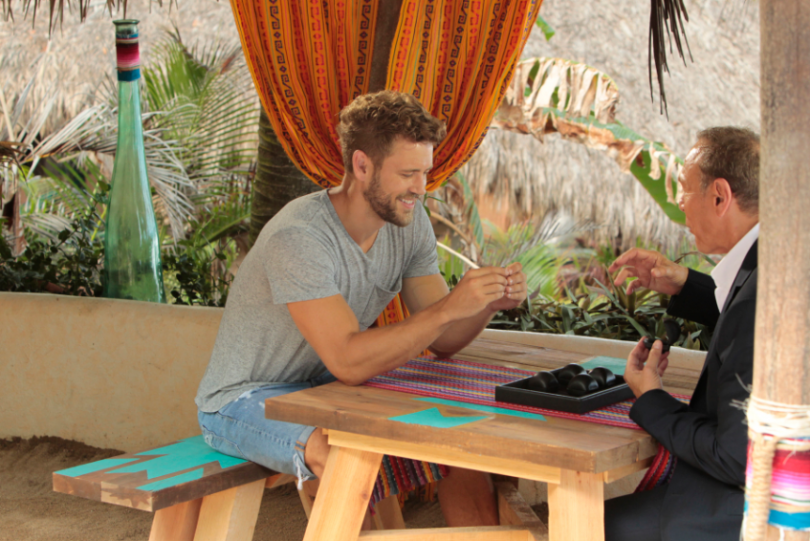 The show starts with a much shorter opening due to only eight people remaining. Evan and Carly are in white robes in a hotel (apparently Evan got laid). He attempts to rap his way to her heart. Watch out Vanilla Ice. Carly says she will be devastated if Evan freaks out. He has, a bunch of times already and you’re still with him. You’re good.

Grant starts out with a threat to Lace that he might not propose to her. She’s worried they won’t make it. At least you still have matching tattoos! Does any woman want to get engaged with a guy who would rather get a weird tattoo with your name on it, but run when a proposal is around the corner?

Jen gets breakfast, specifically orange juice in bed with Nick. He says that he could be the next Jade and Tanner with her (he has some sort of obsession over being that) and can imagine looking at her face for the rest of his life. If by life he means the next 50 minutes, then sure.

Amanda is chilling with Josh on the bed, she claims their relationship has been, “so perfect”. The power of Joshzilla. Breaking News: While Amanda talks about her kids oversleeping every morning, Josh is eating something that looks like an orange, NOT pizza. Josh makes the most logical and smart comment about not rushing things with her due to the children being involved.

Neil Lane, meet Evan. An encounter we never had foreseen. Grant looks depressed heading to his meeting with Neil. Nick and Neil meet for the thousand time. They will meet be meeting in a few months again. Neil seems to be pleased to see Josh. Probably the happiest reaction Josh has got in paradise, aside from Amanda.

Apparently it will start early. Evan is waiting beachside for Carly. The obvious moment of truth is coming. They express their love to each other. Evan gets on one knee and asks her if she will fricken’ marry him. Yes, she fricken’ will. They both accept each others roses. She fully embraces his weird. Not many that would. Love was found between these two quirky individuals. Love is strange.

Time for Grant to step up and make a decision. Lace is nervous. She does most of the talking, telling him all the things she likes about him. She forgets to mention his indecisiveness. Grant starts his speech and blaming the lack of time. He starts with the whole “but”, but then he backtracks and proposes to her. She says, “YES”. If everyone got engaged that quick, Neil Lane would rule the world.

Surprise, Jen is looking hot..again. She is ready to be a wife and a mother, with Nick. Well that might be a problem Jen. She gives him the speech and tells him that she fell in love with him. Nick begins to cry and tells her that his heart is telling him that he doesn’t love her. I’m thinking the producers and ABC are controlling his heart. Jen thinks he will regret it, he won’t. He got the Bachelor gig. Although, I’d certainly never break-up with a Jennifer Boobage. That’s plain craziness.

Amanda is ready for Josh. She’s expecting a rose. How about a ring? Josh might be getting cold feet. He’s debating on not rushing an engagement. Josh begins his speech. He begins reminiscing their relationship. Says this is true true love that he’s feeling. Without hesitation he gets on his knee and asks her to marry him. Her hand is shaking as he put the ring on it. Soon as they kiss, the camera pans to the side to a standing Chris Harrison who concludes the show. That just proves that Chris Harrison is always lurking in the shadows, no matter where you may be.

A blooper outtakes reel plays from the entire season, updating the status of the cast members that left paradise earlier. Nice touch there. Feels almost like a documentary. Here are some updates that matter: Evan and Carly are moving in together in Nashville in December. Lace moved to San Francisco to live with Grant. Wow. Josh moved to Orange County to be with the girls and Amanda. Nick becomes The Bachelor. Another shameless promo.