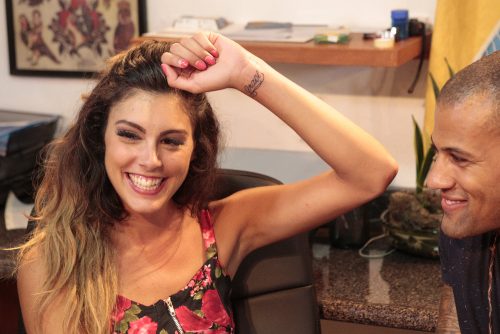 The show starts out with Grant and Lace discussing their relationship. Nick and Jen are talking about deciding their relationship, Nick tells her that Kaitlyn and Andi weren’t for him–sure. A new arrival is the chicken enthusiast Tiara. Evan is impressed. Nick must be also, because he heads over to talk to Tiara. Nick manages to swindle away a date card from Tiara. What a sneaky ass.

The Jen and Nick date is at a carnival. She’s feeling him and wants him to open up about his feeling for her, she’s ready for him. So what better way to find out about each other than by going to a fortune teller. Nick appears terrified. The fortune teller seems to be on point. See that stuff is real! Nick tells her that the only reason he’s there is for her. Goodness is Jennifer Boobage smokin’ hot. This is easily Nick’s best catch (we know how that turns out). He says he’s falling in love with her.

Izzy In The Dust

The women are fighting for Brett. Unreal. So Lauren confesses her affinity for him, he admits to having a better connection to her than Izzy. He’s ready to give her a rose. Brett goes over and tells her that he wants to pursue things with Lauren. Now, Izzy is left with no one. Suddenly she’s regretting Vinny. What comes around goes around. She got what she deserved and she knows it. Suddenly she loves Vinny. In the limo she calls Vinny, tells him she regrets her mistake. She tells him she left paradise for him–lie! She left because lamp man dumped her. Vinny slams the door on her. Tells her there is no coming back, and hangs up. Hell yeah. Way to have some pride. The producers stop the limo so she can puke. Why are we seeing this?

So the chicken chick is devouring friend chicken. Fitting. The pre-rose ceremony. Five women scrambling for two roses. The three-way battle for Wells begins. Wells and Ashley I. get more intense with a mini makeout session. Shushanna is at a loss, so she’s making a power move. By power move I mean she is about to leave paradise on her own. Wells runs after her. She tells him that she wants someone to fight for her. She doesn’t fight for guys, or fight for love.

Chris Harrison comes out to scare everyone talking about the importance of this rose ceremony and the seriousness of these relationships. Josh isn’t afraid and gives Amanda his rose. Nick gives Jen his rose. Grant to Lace. Evan tells Carly h feels for her like he’s never felt for anyone before. The lamp man is up next and he admits to not feeling a spark, so he won’t give out a rose. This guy is pretty honest and genuine. Credit to lamp man for being a stand-up guy. Wells has the final rose. It’s between Jami and Ashley. Ashley gets the rose. The newbies Lauren, Jami, Tiara are heading home. At least Tiara was there long enough to eat some chicken.

After the ceremony Harrison tests the couples to be Jade and Tanner. Convinces them to have a hard discussion before the fantasy suite. Carly is worried that she might be blindsided again like she did last year by Kirk. Nick wants to make sure if Jen is “the one”. Nick claims that Wells will be a national treasure if he takes Ashley’s v-card. Ashley is pretty confident and excited about the overnight, but Wells doesn’t seem so sure. He’s about to turn down a fantasy suite with her. Uh oh. Wells claims that it’s against his character to go to a fantasy suite. Said no guy ever in history of the show and world. Another guy bites the dust. What’s with all these honest guys passing up on overnights?! Gone is Wells. Gone is Ashley.

Four couples remain. Chris Harrison comes back to remind (scare) the couples. He gives the advice for everyone to be honest. The couples are all headed for their individual dates and separated from the remaining couples. Grant has grandeurs of delusion of being married to Lace. The delusion reaches another level when he suggests to her that they both get “GRACE” tattoos. The combination of their names. Geez is this dude pushy. So Grant is officially screwed with that tattoo on his wrist. Lace is having some doubts, but finally gets herself to do it. That makes two mistakes.

Jen and Nick go paddle boating. Epic fail by Nick. That dude has apparently never seen the water. Jen is in love with him, but will lose her if he doesn’t open up to her. Evan and Carly get another weird date. Painting semi naked, with big boobed older lady surrounding them. Awkward. Evan is painting Carly’s ass. Guess it isn’t that bad after all. Carly doesn’t wanna get Kirk’d. Josh and Amanda get to play soccer with some random street kids. Is this even a date? Amanda thinks Josh would be an amazing dad.

Everyone gets a dinner date before the overnight. Carly tells Evan how she always wanted to be with someone like Evan. They tell each other that they love each other. Of course Evan felt it in his heart long time ago. Well Evan is getting laid.

Nick is scared about the long-distance possibility with Jen. Their overnight gets started quickly, as they start getting it on in the jacuzzi. Lace wants to reassure Grant that she’s all-in. Well didn’t that silly tattoo already say that? She tells him that she loves him. She thinks he is everything that any woman wants–really? Josh is excited to meet Amanda’s kids. She is convinced she wants to marry Josh. She’s all-in.