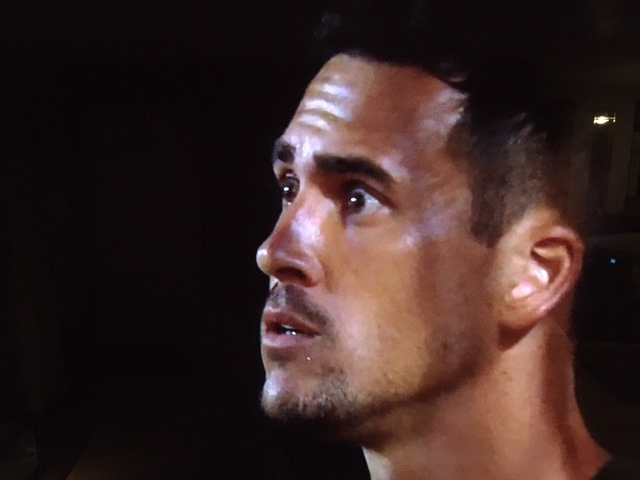 The Ashley and Caila encounter from last week picks up where it left of. Caila claims that Jared thinks of here Jared’s sister. Shots fired! Caila leaves and Ashley and Jared have a chat..again. Jared wants to figure things out and she just complains that she doesn’t have a guy to ask her out in paradise. Ashley is looking extra nipply tonight, it’s overly apparent. The spirit of Ashley’s deceased dog will help her. That’s according to her as she wishes for a man.

Dogs are barking all over paradise as the prayers have been answered in the form of Wells. Bachelor gods have answered Jared’s prayers also. Entire paradise is trying to bribe Jared with Ashley. This is a true group effort. Wells is impressed with Ashley’s Instagram account. This is a big deal. The entire Bachelor world gathers in the pool as Wells makes the biggest announcement in the history of paradise by asking Ashley on a date. Cheers erupt, everyone applauds, as if a major professional championship has been won. It’s that big of a deal.

Jared and Caila are thrilled with the good luck charm that is Wells. Caila makes it clear she will be giving Jared her rose. Jared and Ashley are on their date and as soon as they sit down to eat some tacos, Wells proves to be the sloppy eater that he is by dripping tacos all over another. They talk Jared immediately, she reassures him that he’s not there to get her mind off Jared. What do you talk about when you try to endear yourself to a radio DJ? You tell him that your favorite all-time favorite band is Hanson. I’ll pretend that was never said. Ok, moving on. A homeless pup walks up to them and they feed it. Good deed. Ashley is fooling himself and makes out with Wells and pretends to herself that she’s into him more than she was into Jared. Lies, lies, lies.

Grant is concerned with the weather from the previous night, while Lace is giving him a cold shoulder. Lace threatens about not giving him a rose. Few words later Lace breaks up with Grant. The crazy is coming out again. Lace can’t be around Grant so she storms away, leaving ‘lamp man’ Brett looking a ravaged C.M. Punk in awe (literally). Grant chases her and starts apologizing to her (for what?). He’s such a sucker for someone that’s pushing him away.

No Room For You

Nick and Jennifer Boobage get approval to sleep in Amanda’s room, not for long, Josh left his fan there and is calling dibs. In the meantime Amanda is in deep sleep in another room. The producers must inform Josh that Amanda won’t be sleeping with him tonight. Nick and Jennifer will be sleeping on the couch apparently. This is setting up a Josh and Nick encounter.

Prep time for the rose ceremony. The women are picking tonight. Chris Harrison arrives and warns that one guy will be leaving paradise forever, as if they have no entry to EVER get back there in their lives. Grant is bragging about some phantom progress he’s made with Lace. Carly and Evan are becoming the most stable couple, Evan tells her that he’s falling in love with her. Daniel is bringing the heat to get a rose from one of the twins. By heat he brings a giant plate of chicken tenders. He’s not done. Izzy gets a Canadian lamp. Bretty is intimidated by Daniel’s lamp, so in a rush of desperation he plants his tongue down Izzie’s throat.

Josh spews a bunch of nonsense and tells Amanda that he’s falling in love with her, she reciprocates it. Nick and the twins are checking up on how they are feeling, but their concern for Josh outweighs all the pleasantries. Nick voices his concern over Josh’s behavior, he defends Andi’s book. The Josh conspiracies begin. The twins “completely trust” Nick. Who would have thought they would ever hear those words in reference to “The Other Guy”.

Finally onto the rose ceremony. Carly gets to hand out the first rose to Evan. Who thought he’d be a shoe-in. Ashley I gives her rose to Jared…just kidding, she gives it to her new flame Wells. Jenny Boobage giver her rose to Nick. Izzy to the lamp guy Brett. Caila gives it to Jared. A very happy (crazy) Lace offers her rose to overly delusionally smitten Grant. Amanda to Josh. Haley the twin has a conundrum, she calls for Emily. So the twins decide to leave due to not finding any love. That means Carl, Daniel and the producer that’s playing the part of a contestant are all heading home along with the twins. Before they get to say their goodbyes the twins want a chat with Amanda.

The twins warn Amanda about Josh. They are crying for America’s Sweetheart. They claim to have a reliable source for the book intel (Nick). Then poof the twins disappear. Twin magic. Josh plays dumb about what is going on with Amanda. She ends up throwing the twins under the bus and spilling the beans on what they told her. Josh claims the book is ludicrous. Josh continues saying that he hasn’t left anywhere for months (but he was on an E! reality TV show also). Josh is on the look for the source. He erupts on everyone and turns into Chad Jr. demands answers and someone to step up, wouldn’t you know Nick does and questions if he’s genuine.

Josh continues to blow up and gets into a battle of jabs with Nick, who is calling him on his crap. The most impressive part is that Evan is standing between them at the forefront. Now that’s a man full of testosterone. Chad has officially gained a new tag-team partner in Josh. He packs his bags and is ready to leave. Amanda is STILL on “Team Josh”. They kiss and make up. Love is blind.

Hurricane Josh ended, next morning Wells is walking around the beach alone. Someone is coming down the steps. Jami the Canadian (damn Daniel). She doesn’t even care to look for anyone else, she’s all about Wells, so she asks him immediately and he accepts. Jared is back to his depression. Leave it to Nick to break the news to Ashley that Wells has fled with Jami. Everyone is shocked she isn’t crying. Instead she’s raging on the inside. Everyone is shocked that Ashley has has some sort of breakthrough. Wells and Jami are muddin’ or whatever that is. Wells salutes her to the best dates he’s ever been on. When she mentions her love for Batman, he’s smitten. Sure takes a lot to impress him.

Ashley is not worried, instead she’s still obsessing over Jared. Ashley is losing her mind so she goes to Caila to warn her not to make out in front of her. Ashley tries to guilt trip Caila over being here for Jared. Caila folds and can’t take the pressure anymore, so she goes to tell Jared she’s leaving.