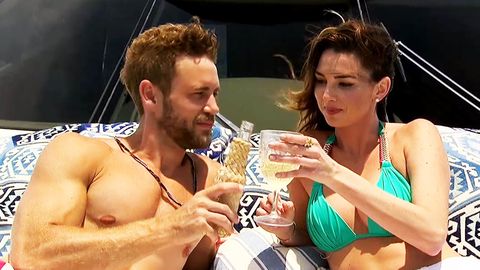 Ashley I. arrives and is greeted by Chris Harrison. She claims that Jared and her are great friends, but she wants more. She also promises to cry three times or less–yeah, ok. At first glance Jared is stone-faced when he sees Ashley. She takes Jared aside for a chat. He reveals to her that he’s dating Caila, Ashley is losing it on the inside. Adding fuel to the fire, the twins tell Ashley how excited Jared was for Caila. What do you think that’s going to cause? You got it, cry storm number one.

Ashley seeks advice in the talking parrot. She’s debating on leaving, but first she goes over to chat with Caila. Allegedly there was some behind the scenes conversation between the two prior to their arrival where Caila said Jared wouldn’t be her type. Jared attempts to make Ashley stick around. He tries convincing her to take Daniel on a date! She’s stuck with Daniel. LOL. That is gonna be a mess. Grant is confident that this could be one of the most entertaining dates ever.

Daniel might have surpassed Evan (speaking of Evan, where is this episode?) as the most awkward guy on the show. First thing he asks Ashley when they sit down to dinner is if she’s losing her viriginity sometime soon? Next topic of discussion is swinging it both ways, apparently Daniel is all about Nick and his 35 years of experience, Ashley suggests Jared for him. She also reveals that Jared doesn’t wanna touch her. Ashley and Daniel discover that they are bonding.

On the other end, Jared is worried that Caila won’t open up due to Ashley’s presence. Daniel is turned on by her virginity. He’s offering Canadian bacon and maple syrup, not the actual foods though. Suddenly they are being surrounded by a bunch of masked people who take Ashley away for a virgin sacrifice–literally. Daniel is left all alone. So he pulls a Chad and starts eating. Fitting.

The Boobage Has Arrived

Nick is holding out hope to connect with someone fun and super hot. Well Nick, you’re wishes are about to be answered with the arrival of one of my personal favorites, Jennifer Boobage! Jen attempts to get a lowdown of the lay of the land and who better to confuse the poor girl that have the twins try to explain the relationships in a web of confusion. Daniel offers his Canadian dollars to go on a date with him. Nick tells her straight up he wants to go out with her. Wow, he actually didn’t reach out to her on social media prior to the show? The man is finally growing up at age 35.

Carly is coming up with theories that Evan is getting himself sick to spend time with Carly. So the medical professional checks up on Evan’s swollen ankles. I don’t know, don’t ask. Recommends that he goes to the hospital, but Evan has an idea. Uh-ohh. Evan asks Carly to join him–in a hospital.

On the boat Jen and Nick are flirting and drinking. The camera won’t lay off her “boobage”. The ambulance is taking Evan away, Carly is there with him, Evan is smiling as if he won a prize. She’s officially re-boarded the Evan train. This is not a train you want to ride. Jen and Nick are laying around on the beach, but a crab attack is well underway. There are hundreds of crabs taking over their spot on the beach, as horror music once again is played. They are mastering the background audio this season.

After the commercial break, the iguanas head is turned upside down upon hearing Ashley’s crying. Preparations for a rose ceremony are underway, which means a lot of last second pleas from the women. Jared and Caila chat it up, she makes excuses for not opening up. Nick makes the best point of the night when he lays it on Ashley I. and tells her she will never be with Jared, she just has an obsession over him. Jared is talking to Ashley and he’s frustrated in the situation. She’s crying for the 20th time. He’s pissed. Big revelation, Jared drops his head down in frustration and a bald spot on his head is revealed. Now that’s a cliffhanger.