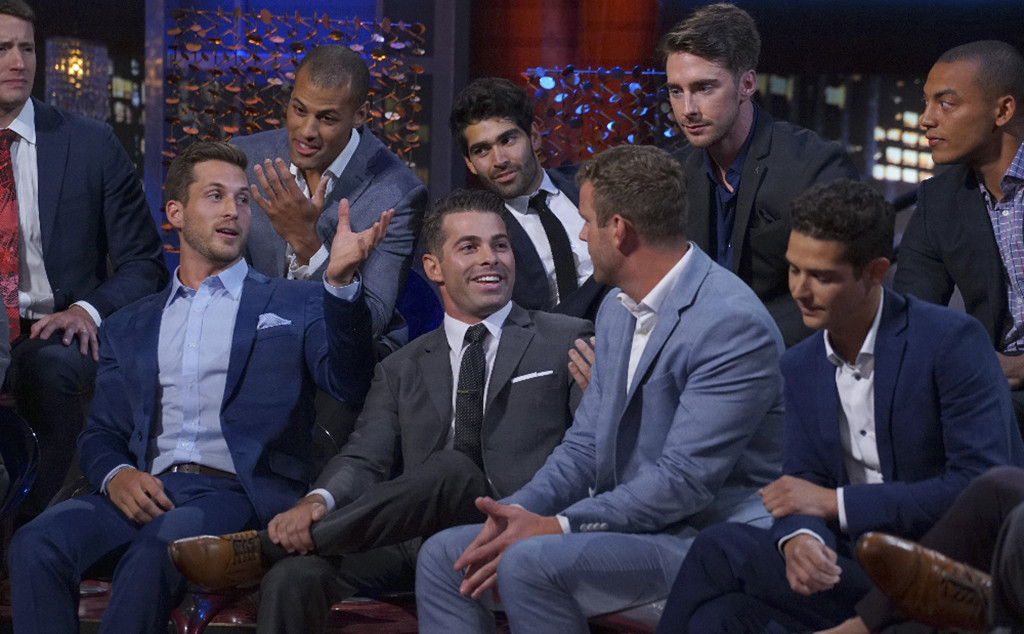 The Men Tell All begins with a standard intro by Chris Harrison and a sneak peak at Bachelor in Paradise. A show that looks heavily focused on Chad. Harrison introduces all the men in attendance and I swear a few of them never appeared on the show. Before the guys get to talk, a clip is played recapping the season and the relationships in the house. Chad drama and picking on Derek is highlighted. Alex disses Derek, but the tables turn and everyone starts going at Alex. Ali defends Chad. Ali has officially said more than he has all season long. Before the commercial break another planted Chad vignette airs of him eating meat in a trailer.

After the break Chad comes out of his trailer. It’s daylight, so much for the backdrop of the entrance. Chad comes out and goes straight to the couch to talk to Harrison. A lengthy Chad reel airs. They are milking these clips tonight. Chad calls the guys a frat. He feels like the only honest guy there and calls out the guys for wanting to be famous. Talk arises about Chad dating Robby’s and Grant’s women. James F. takes off his blazer and calls out Chad, a minuscule threat of a fight arises (rolling my eyes).

Chad talks about being real and continues to make funny voices. I’m genuinely debating if this guy might be actually legitimate or a psycho. Chad talks about Jordan being in it for a media job and Robby threatening his ex. The longer Chad’s on the hot seat (it’s a long time), the more apparent it’s becoming that he’s making some valid points. One such issue is the “pushgate” between him and Evan. They replay the video of the shirt ripping incident. The audience shouts out that Evan pushes Chad. It’s like a Bachelor trial and the jury in the form of a bunch of women in the audience.

After Chadzilla finally leaves the hot seat, Luke is up next. A highlight reel of Luke and JoJo airs. Luke admits to being in love with JoJo and still loving her. He just wants her to be happy and regrets holding back. Luke talks about the pain he’s endured since being sent home by her. Chris Harrison asks him about what’s next, egging on the idea of him being the next Bachelor. Harrison asks/states, “Seems like you’re ready for love again”. Like that isn’t a MAJOR hint.

Chase is next to join the hot seat. Chase reel runs. A whole lot of monotone boredom. He admits to being blindsided by JoJo. He doesn’t understand why she offered him the fantasy suite. JoJo was the first person he’s ever told he loves first. Geez. Don’t date this guy, you’ll wait forever. He tells Harrison that it’s heartbreaking for him to watch the show.

It’s time for JoJo to come out and face the guys. She tells Harrison how tough it was to breakup with the guys. Harrison asks her about Luke. She explains that she didn’t feel something with him she wanted to on the last date. Luke asks her, had he told her that he loved her earlier that it would make a difference. He thanks her for allowing him to love her. Apparently she opened up feelings for him.

Chase comes up on stage to talk to her. He asks her about getting the overnight date from her, then her pulling out on it (no pun intended). She says she felt guilty about that, but he tells her not to. Once again another guy thanks her for opening them up to love. Is JoJo officially Cupid or something? What the hell is going on. Everyone is thanking her. She DUMPED you guys!

James Taylor gets to talk briefly. He compares her to dating apps, which turns into some sort of compliment. Chadzilla gets a word in with JoJo. He wishes her happiness, throws Robby under the bus by mentioning that he broke up with his ex to go on the show (seems true). Next he calls Jordan a liar and cheater whose older brother won’t even talk to him. He concludes by wishing her the best of luck. What a guy. JoJo refuses to respond to Chad, says that he’s a waste of her breath to which all the guys stands up in unison and applaud her.

The forum is open to ask her questions. Alex tells her that he didn’t know how to handle rejection (part of Napoleon complex). She sympathizes with him and wanted to smooth things over. Derek brings up the whole “reassurance” talk. JoJo confirms that she gave him reassurance and that he didn’t ask for it. So there, the Derek reassurance saga comes to a conclusion. Vinny’s beard and hair are a brief topic of convo. An Italian blonde haired diva pops out of the crowd, it’s Vinny’s mom! She tells JoJo made a mistake with her son. JoJo tells Vinny that he was her best friend in the house. Last thing any guy wants to hear.

Bloopers are next. Apparently there was a major bug problem on the set. Bugs all over JoJo. Monkey trying to drink a 7 UP in Thailand (it has good taste). A preview of the finale airs and that concludes the show.

There is was. Nothing earth shattering. Fairly mundane and predictable Men Tell All. The first half of the show was all about Chadzilla. Then we had some Luke and Chase. JoJo received compliments from the guys for changing their lives. That was all.