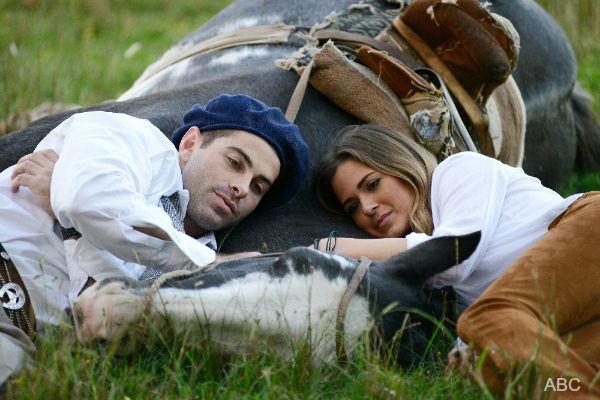 Week 7 of The Bachelorette starts out with a pity date. Cry baby Alex a one-on-one date with JoJo in Argentina. Luckily for the rest of the guys, they get some Argentinian clown bus ride, while JoJo and Alex are eating Pringles. Whose actually having fun? Wait, never mind, the guys are attempting to rap on their bus ride. WORST. RAP. EVER.

Alex gets a visit to the ranch to be a gaucho. Alex looks like a French pirate instead of a gaucho. The gaucho and the horse display some impressive and weird routine. It’s like a horse-dog. Kinda cool. Alex and JoJo lay around on the horse, literally pinning it’s head. Get off the horse’s head Napoleon Alex!

The clown car bus ride comes to an end and the guys get dropped off in a nice vila. Back on the date Alex and JoJo are having drinks, Alex is finally feeling reassured. Not for long. At the vila Robby comes with a date card and announces that Jordan gets a one-on-one. No surprise.

In order to save his ass, Alex makes the proclamation that he thinks he’s falling in love with JoJo. He follows that up by telling her that he fell in love with her the moment he saw her. Umm…so which one is it bro? She looks dismayed by that. No joy for JoJo. She tells him that she doesn’t feel as excited as she should feel. It was just a moment for her and she doesn’t think she will get to that point. He thinks it sucks. He gone. It wasn’t you man, it was your height. JoJo is torn up on how she lets him go.

Trouble With The Rodgers

Jordan is well dressed for his solo date. Burgundy t-shirt and shorts. Not a future wardrobe stylist. A plane is waiting for him. JoJo is about to kidnap him from all the dudes. Please take him. Soon as they land they are headed to a vineyard. Bad choice. Jordan starts to pluck away and eat up all the grapes. To make matters worse they both stomp on a bunch of grapes in a bucked and proceed to drink whatever came out of those grapes. Eww. A hot top in the vineyard–yes! Finally. Sheer shortage of hot tubs this season. Back at the vila, Luke is worried about Baby Rodgers offering tickets to a suite for Super Bowls. Whoa, whoa, whose to say he has this sort of hookup? When was the last time the Packers even made a Super Bowl?

Another date card arrives. Robby the resident card reader announces that Chase, James and Robby get to go on a group date. Luke gets the solo date. JoJo is on a dinner date and recounts the magical date traveling and tasting the grapes of Baby Rodgers date. So apparently Aaron won’t be there for the visit. Surprise! Apparently Aaron doesn’t even know that Jordan is on this show. Shockingly Jordan opens up about never being the best. He opens up about not living up to expectations. Interesting stuff. Baby Rodgers tells her he’s “so in love” with her. Unlike Alex, she’s THRILLED to hear that.

Bad news is that the group date is about to begin. Good news is that it gets rained out. Aww shucks, they still go on a date. Lunch date that is. American junk food. This sounds like heaven. James is showing a bazillion french fries in his mouth. This is what every woman wants to see in her man. A nearly puking boyfriend. Massage train? Truth or dare. I swear they are sixteen or something. JoJo dares Robby to run down the hotel hallway in his boxers and flash his pale ass. Robby apologizes to his grandma. Yo, how about you apologize to the nation for having to see that display. Best part of the night is when they all start watching the Brazilian Bachelor. Classic. James plays tattle tale and tells JoJo that Robby has been having a wandering eye for Argentinian women. What guy wouldn’t?

JoJo and Robby have a chat outside. The upcoming hometown dates are discussed between them. JoJo isn’t sure that Robby is over his ex. Chase doesn’t even get to go outside to talk to her. He reveals that he’s scared to tell her he loves her. He stumbles and mumbles and somehow tells her that he wants to spend his life with her. James Taylor has some solo time with JoJo. He tells her how (boring) his hometown date will be. The nervous chatter among the guys ensues. James T. thinks Luke and Baby Rodgers are frontrunners and staying (true). Robby gets his panties wrapped in a bunch and starts defending his frontrunner status. Enough of guys panicking. JoJo walks in to give the first hometown rose. Frontrunner Robby gets the rose. She dismisses the guys and spends time with Robby and his rose. Dejected James and Chase get the lonely walk home. The rational James gets that he or Chase are going home. Damn right.

Speaking of frontrunners, Luke gets his one-on-one. They go horse riding. Of course Luke is in his element. She’s so impressed that he can look so good and get his hands dirty. Oh yea, he’s Mr. Clean now or something. They shoot guns. So country, so fun. Luke talks and she listens. He could talk about laundry detergent (speaking of which I just consumed some thinking it was lemonade–idiot) and she would be smitten.

The guys get picked up in the rose carriage. Best part of it is that random neighborhood dogs are chasing them. Three roses for four guys. Loser isn’t going to hometown. Luke gets the first rose. Baby Rodgers gets the second rose. The final rose goes to Chase. James T. unsurprisingly goes home. He was in friend zone from the start. He’s the Chris Soules of Andi’s season. James has a conversation with her before he leaves. Classy from start to end. Feel bad for him. Legitimately great guy from what he seems to be on the show. Nice guys do finish last.