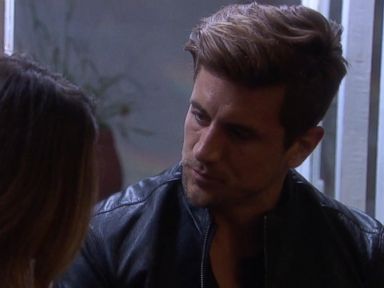 Week 5 of the Bachelorette starts out with a trip to Buenos Aires, Argentina. The guys are going down south with JoJo. Chris Harrison pops out of nowhere to have a chat in the park with JoJo. I swear he’s the Where is Waldo of Bachelor. JoJo poses a question to him about her falling in love with two people, just like Ben. Robby can’t think of a better place to fall in love than Argentina. You mean the overcast and gloomy looking place? The guys are walking down the street, lead by the very small Alex. Harrison tells them that there will be a two-on-one date coming up.

Having A Sweaty Ol’ Time

Robby arrives with a date card. Wells is going on a solo date. Wells makes the major revelation that he hasn’t kissed JoJo. Definitely wouldn’t make the Top 40 Countdown in JoJo’s universe. As JoJo arrives to pick up Wells, one of the guys shouts out and asks her if he’s going to kiss her. The pressure and buildup of the kiss is the most talked about topic. JoJo is yearning for a kiss, so she takes him to an art show? Wells attempts to find excuses as to why he hasn’t kissed her. He describes it as waiting for a perfect situation. Here is some advice…JUST DO IT! Apparently they are doing “performance art”. Whatever that is? Apparently it consists of Wells running on a treadmill and being hooked up to a rope. Sort of like a human marionette. Next up they are sliding around in some water slide pool. He finally manages to kiss her, awkwardly, to say the least. I feel like he deserves a prize or something.

What could top a giant water slide inside a pool? A dinner in some mansion. Wells is sweating immediately, so the jacket comes off. JoJo wants to know about his ex.

Date card arrives. Luke, Robby, Jordan, James, Alex. That means Derek and Chase get to go on a two-on-one. Wells royally screws himself by saying that initial spark fades away. JoJo immediately disagrees. He’s done. She picks up the rose and gives a speech, follows it up with a “but”. No rose for Wells. She gives him the petty appreciation speech. Off goes nice guy Wells. Guys are shocked when his luggage that looks like a garbage bag gets picked up. What does JoJo do right after she sends him packing? Goes and crashes the “performance art” party. Poor Wells.

Group date. All I can notice is how impressive these dude’s hair is. Those are some slick hairstyles. James doesn’t consider himself to be a “sexy dude”. Yeah, no shit. So of course the guys start randomly playing street soccer. A penalty shootout for a kiss from JoJo on the line. These dude’s are worse than Lionel Messi (pun intended) at penalty kicks. Looks like no one will be making Argentina proud. Wouldn’t you know singer James steps up and scores a penalty kick to get that arousing kiss from her. Messi might have quit on Argentina, but James is there to pick them up. A real hero.

Unconfident James is praising the connection JoJo has with other guys, while she steals Luke away for some solo time. Luke wastes no time to securing his front-runner status by telling her how he wants to come back with her years later to reminisce on their connection. Or as she would describe their connection as CR-A-ZY. Derek is certain that he will be there three, four weeks from now.

James wants to establish himself as a trustworthy guy so he badmouths Baby Rodgers and throws him under the bus. Calls him a celebrity chaser. JoJo takes Jordan aside to have a chat. Baby Rodgers laughs off the altercation with James. He nominates James his best friend in the house. Of course he is. Baby Rodgers explains how he doesn’t even know what “entitled” means. Hahaha. I can’t. This guy should most definitely work in PR. When Baby Rodgers arrives to sit with the guys, awkwardness ensues. Swishing around his wine in the glass. Alex might have the best reaction by taking a long gulp of wine. Who gets the date rose? JoJo gives the rose to someone that excites her about her future–Luke. Meanwhile Baby Rodgers can’t get over the “entitled” label.

Don’t Cry For Me Argentina

Two-on-one with Derek and Chase. JoJo is dressed in a sexy red dress that inspires thoughts of Emilia Clarke in “Me Before You” (I love that movie). For their date they are going to tango. The tango between Chase and Derek is the highlight of the date so far. It gets really weird when they keep passing her off to each other. I’m getting dizzy seeing her swinging from one guy to another. Someone get a hold of this woman. JoJo has a talk with Derek, she tells him he’s fallen behind and been quiet. Suddenly on cue he tells her he’s falling for her. On cue. Here comes the mundane Chase. JoJo tells him she doesn’t feel like he’s given her much back. Talk about no personality. Apparently it’s new to him to express ideas and feelings of interest. Geez this guy is so boring. I could find a broom stick that has more personality.

Two guys and only one rose. She appreciated Chase opening up to her and she gives him the rose. Unreal. JoJo walks Derek to the car and burst in tears momentarily, then immediately she’s runs to Chase and is making out with him as we hear Derek’s testimonial in the background. Talk about fast paced editing. That’s cold. Derek questions himself as to why he’s crying, as “Don’t cry for me Argentina” plays in the background. Classic.

According to JoJo the cocktail party is important. It is? Baby Rodgers attempts to save his ass and takes her aside. He starts giving her a speech and she’s all smiles. She’s just so smitten with this dude, no matter what he says. He could be talking about football plays and she’d have hearts in her eyes. Not that he knows how to run football plays in the first place. Alex gets some solo time and immediately starts complaining about not getting one-on-one time with her. Chop meat James is worried about going home. A quick kiss later he feels confident. Go figure. A confused JoJo is unsure about her decision, so she needs a breather.

Who is going home tonight? Rose Ceremony begins and three roses are at stake with four guys available. Robby gets the first rose. Not surprising. Baby Rodgers gets the next one. Down to Alex and James T. If she’s going by height then the choice is a no-brainer. The sheer three-foot difference between Alex and James is too appalling. JoJo can’t give out the rose and storms out of the room to talk to Chris Harrison. She comes back and tells them that she couldn’t hand out the final rose, while Harrison comes back with two roses. Both guys are staying. Oh JoJo. Putting everyone through the grinder. James is thrilled. Alex looks like some tragedy happened to him.

Takeaways: Surprised that Derek and Wells went home before Chase and Alex did. The latter seems to be hanging on by a thread. James Taylor’s pity roses are about to come to an end next week. It’s clear that with home town approaching that Robby, Baby Rodgers and Luke are the clear favorites. The fat is trimming fast though. Deeper connections are appearing to be made next week. Things are going to get interesting. The drama is subsiding though.