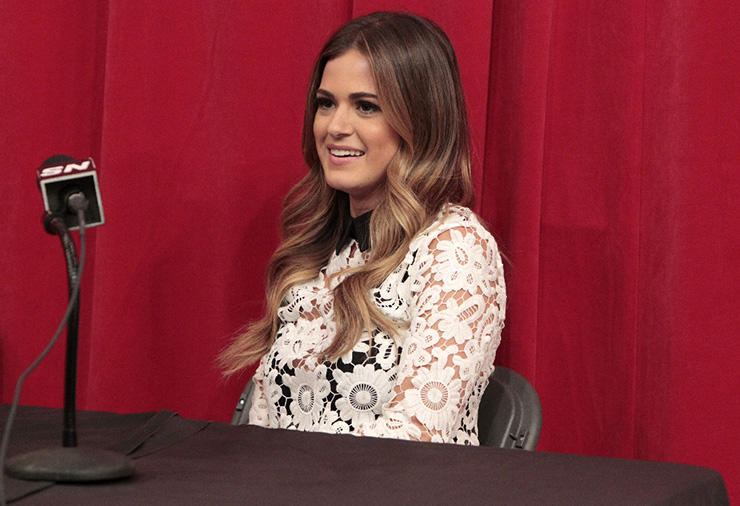 Putting Out The Fire

Week 2 of The Bachelorette starts out with Chad talking…again. Chris Harrison arrives with the first date card–Luke, Wells, Vinny, Ali, Evan, James F., Robby, Christian are going on a date. A burning car explodes, the guys run out of the mansion as JoJo arrives in a fire truck. So now she’s a firewoman? She attempts to put out the flaming limo semi successfully. Chad runs his mouth again about selling cars–who cares dude.

Chad is doing pull-ups on the side of the building. He’s the laughing joke of the house. Fire academy training date. Will they impress JoJo? Doubtful. These guys can’t even get the fireman uniform on, much less putting out a fire. Wells is about to pass out from observing. Where is his boy group of singers when you need them? The pale Wells nearly passes out, so they need to get JoJo to talk him to back to life. Where is the singer group to resuscitate him to life? Grant wins the challenge and barely beats out Wells, Robby, and Luke. Congrats to the ACTUAL firefighter who barely beat out a DJ. Grant was about a minute away from having to change professions, if he wasn’t going to win this. Unreal (not plugging the great Lifetime show).

Grant gets a mini solo date with JoJo. She says that he completely surprised her, she seems impressed by him being a firefighter, that leads to a make out. Back at the house a date card arrives. Derek gets the one-on-one. Baby Rodgers isn’t pleased. Luke just keeps moping about being a loser. Jealously creeping in big time. The crybaby gets some solo time with her and that leads to a kiss on the rooftop. The date rose goes to Wells? He fainted his way to a rose. That’s a work of a Top 40 DJ.

Derek gets his date with JoJo. She picks him up in a classic muscle car convertible. They get to decide if they want to fly or sea. They both decide to fly. Next option on the private jet is north or south. Umm south! North will take them to obscure deserts in California. Ok, so it’s San Francisco. It was that or San Diego. Next decision is Lombard Street or Golden Gate Bridge? They pick the bridge. They have a mini picnic there and kiss. What’s new. Well actually, back at the house a bromance is erupting between Chad and unfunny comedian Daniel. That’s news. Vill’s -2.0.

Jordan, Nick, James, Chad, Alex are some of the guys going on the next date. Chase who looks like a Chris Bukowski’s long lost brother. Bukowski will never retire! Back to JoJo and Derek’s date. Once again another guy who is scared to open up since his ex. Oh please, don’t act like someone died. JoJo talks about Ben. Another Ben shoutout. JoJo needs to reinforce him that talking about past dating burdens is okay. Derek gets a rose.

A trip to the L.A. ESPN studios is on deck for the group date. Sports Nation with Max and Marcellus. This should be an interesting date. Unshockingly Jordan is part of this date. If Baby Rodgers screws this up then he should be ashamed of himself. A touchdown dance celebration with a rose. They have to do a proposal for JoJo. Chad refers to JoJo as “nagging”. Ouch. Mock press conference. They are killing Chad on the mic. Chad is the worst interview on mic. Power Rankings: James gets number one, Chad comes in second. Alex third. Well Max and Marcellus need to evaluate their rankings. Chad keeps boasting about being honest.

JoJo and power rankings winner James get some time together. He reads a poem to her. Chad makes the claim that at 6’4 (him), she doesn’t want a guy like Alex (5’4). Kinda true probably. Chad tells JoJo that he has a Maltese puppy–what? Mentions he inherited it after his mom’s recent passing. There is a water well that they both drop a penny into. Ok, it might have been more, but I don’t think Chad would drop more than a penny on a woman. Date rose goes to James. At least it wasn’t Chad, right?

Creeper Chad is waiting for JoJo at the door when she arrives. A stroll through the parking lot, a kiss, and she walks into the house. The men question Chad’s venture of “getting some air”. Getting air with Chad requires a oxygen mask, because that dude is exhausting to be around. Chad is eating ALL the food available. Wait, there is someone eating food on the show? That’s a first. The guys are throwing around toilet paper. Nooo! Don’t use up the toilet paper, Chad will need it. They better have a good plumber at the mansion, because there is no doubt Chad will be clogging it up. Paranoid Chad manages to scoop up JoJo once again. Needs more reassurance. Thank goodness for the unfunny Canadian to gossip to with. Alex takes it upon himself to call out Chad, who threatens Alex that he will knock out his teeth.

End credits blooper: Christian escorts JoJo into a bubble bath. He’s wearing a male bikini. Bad look. She soaks her feet in the bath and kicks something. Must be a rubber duckie that she felt.